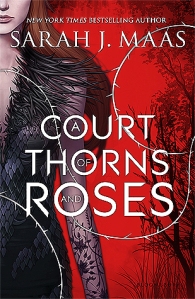 When nineteen-year-old huntress Feyre kills a wolf in the woods, a beast-like creature arrives to demand retribution for it. Dragged to a treacherous magical land she only knows about from legends, Feyre discovers that her captor is not an animal, but Tamlin—one of the lethal, immortal faeries who once ruled their world.

As she dwells on his estate, her feelings for Tamlin transform from icy hostility into a fiery passion that burns through every lie and warning she’s been told about the beautiful, dangerous world of the Fae. But an ancient, wicked shadow grows over the faerie lands, and Feyre must find a way to stop it . . . or doom Tamlin—and his world—forever.

Let’s start with the writing. Chapter 1 – we get it, it’s winter. Not only does Maas have the description of the crunching snow, how hungry Feyre is, and how cold she is, it is stated that it is winter, explicitly, three to four times. This was my first impression of the book and I wasn’t impressed to be honest.

Then there’s the story – comparing it to Beauty and the Beast is like comparing my foot to my dog’s foot. Yeah, sure they both have the same functionalities, and maybe some of the bone structure is the same (idk anatomy, so I can’t tell you how accurate that is), but at the end of the day if you swap ’em neither of us will be content. It’s the same thing here. Sure – there’s the father disappearing and the girl taken away by these supposedly dangerous creatures who are kind of cursed (honestly, there are worse things that can happen…), but that’s where the comparison ends really.

That being said then, how on earth does Feyre come to love him? It’s so forced that I just could not deal with their romance and what triggers the latter section of the book.

On that note, I’ll tell you now that you’ll need to get through about two thirds of the novel to get anywhere with this book. Even Rhysand didn’t save this for me, but he’s a lot more entertaining than Tamlin. In the end, his character’s presence in the next two books is the only thing that kept me reading this series, but even then I can’t say I loved the other two book either…

I’d say this series is just over-hyped. There’s no other way to describe it. Like you have to love it ’cause everyone else does, but I couldn’t. It wasn’t even just me. My roommate and my sister tried reading this book and they were both left wondering how it was as popular as it is… We’ll see what else she has in store, but I can’t say I’m quite sold on the Maas hype.