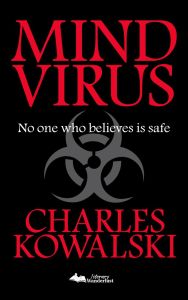 Robin Fox, peace-loving professor of world religions, wants only to leave his dark past as a military interrogator behind him. But when an unknown suspect tries to disperse a deadly virus in downtown Washington, Fox is unwillingly drawn back into the shadowy world of intelligence.

The FBI and CIA automatically suspect Islamic terrorists, but Fox digs deeper to discover the far more frightening truth: a global conspiracy to eradicate all religion from the face of the earth.

From Washington to Jerusalem, from Rome to London, Fox must use all his wits in a perilous race to stop a psychopathic mastermind from unleashing worldwide devastation.

What is the theme of Mind Virus?

Mainly, that the fanaticism that leads to violence can be found anywhere, whether among religious believers or nonbelievers, and the will to seek peace and understanding can also be found anywhere.

How do you develop your plots and characters?

Everything begins with “What if…?” In this case, the question was, “Everyone is always talking about terror in the name of religion; could there be terror in the name of atheism?” From this question flows the rest of the plot and the characters. It was easy to develop Robin Fox; he’s the person I might have been if my life had taken a slightly different turn. As for the other characters, they may be loosely patterned on a real person, or a composite of several. If a minor character doesn’t seem sufficiently well-developed, I ask myself: if I were an actor, how would I play this character? How would I see the story from his or her point of view, since in our own minds, we’re always the central character of any story we appear in?

Tell us about your background. What made you decide to pursue writing?

I’ve been writing stories ever since I learned to write, and finished my first (unpublished) novel at the age of 17. I write fiction because my mind naturally frames things in terms of stories; that’s how I try to make sense of complex issues. I also find that, especially on controversial and polarizing issues, the best way—perhaps the only way—of getting people to see an alternative point of view is through story.

Tell us about the challenges of getting your book published. How did it come about?

It was indeed a challenge. The manuscript won more than its fair share of awards and nominations, and agents and editors found the premise intriguing, but not enough to sign, possibly because they felt the story was too controversial to make it past a risk-averse editorial board. But after dissipating my savings in writers’ conferences, I finally met—on a Twitter pitch fest, of all places—an editor willing to take a leap of faith, Susan Brooks.

What advice would you give to aspiring writers?

Forget what they say about “write what you know.” Write what excites your imagination, and the knowledge you need can be acquired. And if a story grabs hold of you and won’t let go . . . tell it! Pay no attention to the inner voices that say “this is no good” or “no one else will be interested in it.” Believe in yourself, even when it feels like no one else does. To paraphrase Florence Foster Jenkins, people may say you can’t write, but never let it be said that you didn’t write.

Do you have a day job in addition to being a writer? If so, what do you do during the day?

I teach English at a university in Japan. Living abroad adds an extra layer of challenge to the writing process. I often feel somewhat out of touch with contemporary American culture, and research that for a U.S.-based writer would take only a simple trip to the local library, or a call to a local expert, for me requires careful planning and considerable expense. But on the other hand, field research in exotic locations is easier, and living at a distance from my native culture gives me a different perspective from writers who are immersed in it.

What are some of your favorite authors or books?

Of course, I took some inspiration from the big names in the genre, like Lee Child. Tana French showed me it’s possible to write genre fiction with a literary flair. Dan Brown, Daniel Silva, and Jeffrey Small paved the way for thrillers with religious themes. Barry Eisler and Barry Lancet showed me it’s possible for Japan-based authors to produce books with worldwide appeal; I’m hoping the same will prove true even for one who isn’t named Barry! And the list wouldn’t be complete without Leo J. Maloney, who ever since our chance meeting at Killer Nashville has been very generous with his time and expertise and always gave me a dose of encouragement at just the time I needed it.

Thanks so much for your time! We look forward to your upcoming projects!

Charles Kowalski is almost as much a citizen of the world as his fictional character, Robin Fox, having lived abroad for over 15 years, visited over 30 countries, and studied over 10 languages. His unpublished debut novel, Mind Virus, won the Rocky Mountain Fiction Writers’ Colorado Gold Award and was a finalist for the Adventure Writers’ Competition, the Killer Nashville Claymore Award, and the Pacific Northwest Writers’ Association literary award.

Charles currently divides his time between Japan, where he teaches English at a university, and his family home in Maine.

Mind Virus is scheduled for publication by Literary Wanderlust on July 1, 2017.

Other novels and short stories by Charles Kowalski:

“Let This Cup Pass From Me”

“The Evil I Do Not Mean To Do”