Welcome to the Mask and Mirrors Book Tour, hosted by RogerCharlie!~

Illusionist Ian Black has a talent for keeping secrets. College student Rayne Bevan has a gift for uncovering them. She suspects that the popular performer’s skills extend beyond the stage and that he’s the area’s mysterious and elusive defender of the innocent. In her efforts to uncover the truth, Rayne is swept into the hidden world of the Weir, a magical race who struggle to prevent Earth from self-destructing. Her inquiries expose Ian to those who would kill for his connection to the planet, and as he fights to keep Rayne, and those closest to him safe, they discover a force behind the Weir’s raging civil war—a traitor bent on launching Earth’s Armageddon. 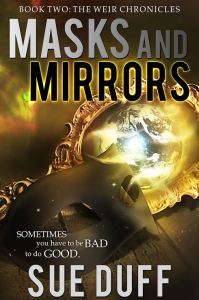 Ian Black’s commitment to safeguarding Earth has come at a price. His career as an illusionist is at a standstill and attending to the planet’s needs has distanced him from his best friend, his guardians, and the woman he loves. When presented with an opportunity to perform, Ian seizes the chance. But moments before he takes the stage, Ian encounters the mysterious Jaered and a rebel force fighting to protect Earth alongside the Weir.

Jaered is determined to stop a malevolent Weir from releasing a drug capable of wiping out the last vestiges of their race and plunging Earth into self-destruction. But when Jaered is willing to sacrifice an innocent child to obtain the drug for himself, Ian risks everything to uncover the secrets of the rebel forces and their true intentions for Earth’s survival.

Learn more about the series here! 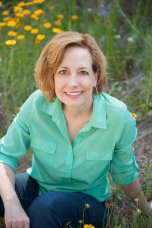 Sue has been writing since high school but never became serious about it until a skiing accident laid her up for an entire summer and she turned on the word processor to combat the boredom. A couple years later, her first urban fantasy novel, Fade to Black, was a finalist in the RMFW Colorado Gold Writing Contest. By day, she’s a dedicated speech-language therapist in an inner city school district to pay the bills but her life as a writer is her true passion and the creative outlet keeps her sane.

Sue is a member of the Rocky Mountain Fiction Writers and The Pikes Peak Writers. Her creativity extends into her garden and the culinary arts. She is the second oldest of six girls with an avid reader mom and her dad, the family’s single drop of testosterone in a sea of estrogen. Fate thought it hilarious to give her a son but maternal instincts swing both ways and she didn’t break the little bugger. She lives in Colorado with her miniature dachshund, Snickers and hears from her son, Jonathan whenever he needs something.

To get the latest news, updates on events or the scoop on future novels in The Weir Chronicles series, subscribe to her email list.