Welcome to the Kirin Rise: The Cast of Shadows Book Blast, hosted by JKSCommunications 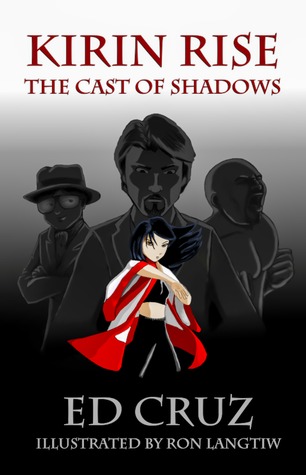 Nineteen-year-old Kirin Rise doesn’t look like a hero. Short and scrawny, she’s not the type to strike fear into anyone, much less the brutes that make up the United Federation of Mixed Fighting. Despite her size, she spent her youth secretly training with her Sifu in the art of Wing Chun Gung Fu. What’s more, Kirin has something that many people in 2032 seem to have lost–a conscience. Enraged by government corruption and corporate greed, Kirin sets out to do something about it in the most unlikely place: the weekly bloodbath known as Chum Night. With the guidance of her Sifu and the help of those who love her, she just might survive.

Kirin Rise: The Cast of Shadows is the story of a young woman struggling against the apathy of a nation in her drive to make the world a better place.

Kirin Rise – The Cast of Shadows is Ed Cruz’s big debut. What began as a straight out manual for learning the art of Wing Chun, expanded into a fascinating story for everyone to enjoy. The book is uniquely broken into three parts: story, manual, and teacher’s guide. This is the first book of an eight part series.

A native of Chicago and a child of the 80’s, Ron has always been a fan of Saturday morning cartoons and kung fu. He learned to draw by watching his older brother draw and tracing his drawings. Life happened and Ron found himself in a career as an Information Technology manager. Ron met Ed De La Cruz in 2000 and began formally studying Wing Chun in 2004. By 2012, the timing worked out to begin artwork again which prompted Ed to approach him with the idea that would become Kirin Rise.

A graduate of Lane Technical High School, Ron studied Electrical Engineering at the Illinois Institute of Technology and graduated from DeVry University with a Bachelors in Computer Information Systems. Apart from Wing Chun and drawing, he is an amateur cosplayer, gamer, and paintball enthusiast. He currently lives on Chicago’s North Side and has two young boys, Ian and Jackson.