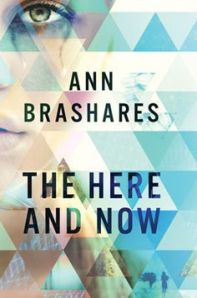 An unforgettable epic romantic thriller about a girl from the future who might be able to save the world . . . if she lets go of the one thing she’s found to hold on to.

Follow the rules. Remember what happened. Never fall in love.

This is the story of seventeen-year-old Prenna James, who immigrated to New York when she was twelve. Except Prenna didn’t come from a different country. She came from a different time—a future where a mosquito-borne illness has mutated into a pandemic, killing millions and leaving the world in ruins.

Prenna and the others who escaped to the present day must follow a strict set of rules: never reveal where they’re from, never interfere with history, and never, ever be intimate with anyone outside their community. Prenna does as she’s told, believing she can help prevent the plague that will one day ravage the earth.

But everything changes when Prenna falls for Ethan Jarves.

From Ann Brashares, the #1 New York Times bestselling author of The Sisterhood of the Traveling Pants series, The Here and Now is thrilling, exhilarating, haunting, and heartbreaking—and a must-read novel of the year.

That genre is a mouthful, but that’s as close as I can possibly get for this book.

Dystopian: Prenna is came from the future, or at least one strand of it. The world was near its end before she left, everyone affected by a plague of unknown original that was carried in mosquitoes (very much like West Nile, but worse).

Sci-Fi: Prenna and a select group of people have traveled back in time to fix the future and prevent the plague.

This was an extremely interesting story. The plot was full of surprises, but also presented some interesting ideas. In this novel, we get a glimpse of the future, or well, multiple versions of the future. The only thing is, they’re not as futuristic as we assume they’ll be – no flying cars, no crazy techno computers (though there was a mention of a supposed Apple invention, which I could definitely see Apple, or even Google, inventing in the future). It was doom and gloom up ahead, one an economic issue, another a eco issue, also relating to the evolution and adaptation of people and animals to a new, less green, planet. I loved this concept because it’s something that is real and relevant to us today. As one person, we don’t see the decline in the world – where the ice caps are melting, the weather is becoming more random and unpredictable, as well as violent. We close our eyes to this. My hope is that this book helps open those eyes and maybe cause a shift in our society.

The overall set up of the time immigrants vs the time natives was also interesting. All the rules and restrictions, as well as the stories of those who didn’t survive the trip or didn’t survive the rules really helped set the ball rolling, giving readers something to compare to when judging the magnitude of Prenna’s decisions later on in the story.

In addition to my love of the plot, I really enjoyed reading about these characters. Prenna was a worrier, but it wasn’t annoying. It was more of exercised caution than mental takeover. It was nice reading the book from her point of view. She found beauty in the things that no one ever notices anymore; one could say that she actually stopped to smell the flowers. She was amazed at how bright our world was, and couldn’t comprehend our wish to stay inside and play with our games and gadgets. However, for a supposed genius, her actions are very impulsive, and lack calculation. Also, she has little care or worry for the repercussions of her actions on the people around her.

Ethan, on the other hand, was helpful, supportive, and just a tad bit boring. He was basically everything that was needed to move things along – a tracker, a hacker, a future-world famous physicist – you’ve got them all with Ethan. Have to say though, he was nice enough, but his character lacked depth, and I know next to nothing about him, even though I finished the book already.

One thing that bothered me more than anything was that they are playing with time. If you play with time, the things from the future should change, no? Like newspapers, and people? Wouldn’t all that go wonky or snap out of existence? Maybe it’s just me, but the fact that there’s a bunch of futures is cool, but wouldn’t one shift change a bunch of other things? Maybe I’m being picky, but time travel books and all is a finicky subject.

Also, they had a tight deadline – what, two or three days – to save the world from one version of the future. However, they loiter and linger on the beach for a day, learning card games and drinking illegally. It was so out of place in this book that it just didn’t work for me. Again, this brings around the whole relationships in YA novels and how there’s just too much emphasis on them. The story could’ve worked without all that, seeing as there wasn’t really THAT much to begin with. I don’t know, Ethan’s whole role in all of this was just a little unrealistic.

All in all, I’d say that this book is a must read, if not for the overall story, then at least for the ideas presented. It is a real eye opener to all the problems our world is facing, whether politically, economically, socially, or environmentally. It’s amazing how well Brashares captures our world in less than 200 pages, giving us a snapshot of our lives and showing us where we all are, and where we should be. Oddly, instead of reading this book to escape, I’d say read this book to see what you’re missing, to realize that there’s more to life than electronics and odd gadgets. However, the story did have its holes, which is hard enough to cover in a long time traveling series, let alone in this one, fairly short novel.