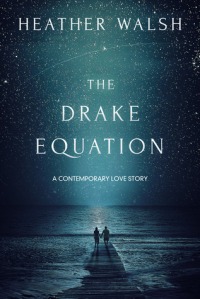 She’s a Democrat, he’s a Republican. She spends her days fighting global warming at an environmental non-profit, he makes his living doing PR for Bell Motors and their fleet of SUVs. But as soon as they meet, Emily Crossley and Robert Drake realize they have encountered their intellectual match. You’re never challenged, he tells her. You’ve surrounded yourself in a cocoon of people who think exactly the same way you do. She hurls the same accusation back at him, and the fiery debates begin.

Despite both of their attempts to derail it, there is no denying that they are falling in love. But their relationship is threatened by political differences, Robert’s excessive work hours, and Emily’s fear of losing her identity as she falls deeper in love.

Can their love survive? The Drake Equation is a tale of modern love and all its complexities.

I REALLY enjoyed this book. It was real, it was relevant, and bickering love interests are always fun.

I really enjoyed reading about these characters. Lots of books have those characters who are just like /toolazytofunction., but Emily was always running on high energy. I loved the enthusiasm and passion that she had for her team, her cause, and her company.  She was also really independent, and I liked that she didn’t really give that up throughout the novel. Robert, on the other hand, was always ready to challenge Emily and get her to look at things from the other side. I feel like they really complimented each other in their views and that made for interesting debates, and therefore made it an interesting book.

I also loved that they didn’t drop everything and frolic off into the sunset with each other. They had very mundane issues (he worked way too much and she hated it, she had an opinion on everything  and was unmovable in many aspects, etc). I enjoyed the simplicity of the book. There was no insta-love. There was a cautious testing of the waters, and then moving into something more. There romance was there but it wasn’t and overwhelming force that left them in crazy emotional puddles. It was realistic and I thought it was genius.

While the plot could be slow at times, Walsh made up for it through sub-plots including the secondary characters (Emily’s co-workers, even Robert’s best friend). This kept the plot moving and the book interesting throughout, which is often hard to do in these types of books. I liked that more than one issue was addressed and that the story didn’t just center around the two main characters and their undying love for each other.

Why am I doing this? Who am I? What does this mean to me? Is it all worth it? These are questions that Emily starts asking herself throughout the book, and the fact that this even came up was absolutely perfect. We all stumble across these questions at some point in our lives, and I feel like, again, it was so mundane and relatable that it worked.

The only complaint I had was the repetition of the SUV issue. I wish that there had been a few other political issues addressed. I understand that a large part of the company she worked at was about the environmental thing, but I feel like she should’ve had her nose in more issues. Maybe she didn’t have to act on it, but she could’ve used that to fodder their conversations instead of the same overused topic throughout the novel.

There were definitely great ideas within this book, and I loved the political spin of it (because let’s face it, literature these days usually revolves solely around the romance or some plot that isn’t really that relevant), as well as the characters. Walsh paid a lot of attention to details, making sure this and that were in place at the perfect times and setting things up just right to make for well timed jokes and jabs. I really hope you guys pick this book up because I thought it was amazing ~

eBook obtained via the author, Heather Walsh, in exchange for an honest review.