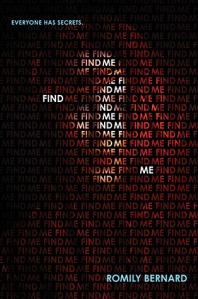 These are the words written on Tessa Waye’s diary. The diary that ends up with Wick Tate. But Tessa’s just been found . . . dead.

Wick has the right computer-hacking skills for the job, but little interest in this perverse game of hide-and-seek. Until her sister Lily is the next target.

Then Griff, trailer-park boy next door and fellow hacker, shows up, intent on helping Wick. Is a happy ending possible with the threat of Wick’s deadbeat dad returning, the detective hunting him sniffing around Wick instead, and a killer taunting her at every step?

Foster child. Daughter of a felon. Loner hacker girl. Wick has a bad attitude and sarcasm to spare.

But she’s going to find this killer no matter what.

Because it just got personal

I enjoyed this book, I honestly did (cue the BUTTTTT), but I wish there was … more… More of the hacking, more of the computer stuff, some of the jargon, some more of Wick’s history. And we barely know anything about Griff, like… MORE.

That’s not to say I really enjoyed the book. The language was quite simple which made the story easy to follow and easy to enjoy. I didn’t have to dash over to Google and find out what something meant, nor did I have to insert words that I think would be there if not for the complicated asdfghjkl kind of words. However, I do wish that the author had delved more into the hacking. It would have made this is a teenage girl who knows how to hack into bank accounts, emails, computer systems in general, a little more believable. Not that I didn’t believe it, but I would’ve loved to hear some kind of computer jargon to make it more realistic, like she actually knows what she’s talking about and not inserting some vague, untouchable code into an alien system that I’ll never really see or feel the effects of.

While we’re on things I wish there was more of, I might as well say that I wish I knew more about Wick and Griff. Granted there was a memory of something or another here and there, but we get very little of the character’s history and past experiences. Maybe we’ll see more in the next book, but at the moment I’m just not satisfied with the little I learned about each character’s past. I also don’t understand why the characters themselves were satisfied with the little they knew about each other. While it was a cute little romance, I would’ve liked more of a get to know you before I kiss you kind of thing with these two character. Wick doesn’t trust easily, and I found it slightly unrealistic that she felt such a buzzing connection and immediate trust with her love interest.

On the other hand, what I did learn about the characters, I liked. Wick is extremely loyal, especially to her sister, and independent. I really respected her for her confidence and ability to handle every situation with a mostly calm head and a rational state of mind. I understood her inability to trust, and I admired her for her quick thinking and creativity when the situation called for it. I thought Griff had a kind heart and, honestly, when a guy drives a motorcycle it gives their awesomeness a serious boost. I even liked Carson. He’s an interesting character that actually surprised me in the end. Overall, while I would’ve loved to see more of each characters’ “dark” past, I loved reading their story.

Now, I’d like to take a moment to freak out about the TWIST at the end of the book. BY GODS. I did NOT expect that at all. All my love goes to Bernard for her ability to spin the story so well. And since I can’t say much about the twist without giving anything away, I’d like to also point out that she is a great writer. She gets the small details right, the ones that make you jump as high as the character did or sit at the edge of your seat in anticipation for what happens next. The action scenes were great and all in all, I was quite impressed with the writing for this book.

So no, this book did not knock my socks off character wise, but I did love the ideas and the plot. Find Me was a well executed, suspenseful read that left me ready to rip open the next book (which isn’t out yet (boo!!))!

About the Author (Bio taken from ARC):

Romily Bernard is a debut author who lives in Atlanta, riding horses and working in corporate law. Find Me was the winner of the 2012 Golden Heart Award and placed first in the 2011 YA Unpublished Maggie Awards (given by Georgia Romance Writers). She has never been hunted by a psycho killer – and she’s okay with that.

2 thoughts on “Review: Find Me”