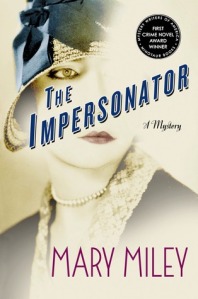 In 1917, Jessie Carr, fourteen years old and sole heiress to her family’s vast fortune, disappeared without a trace. Now, years later, her uncle Oliver Beckett thinks he’s found her: a young actress in a vaudeville playhouse is a dead ringer for his missing niece. But when Oliver confronts the girl, he learns he’s wrong. Orphaned young, Leah’s been acting since she was a toddler.

Oliver, never one to miss an opportunity, makes a proposition—with his coaching, Leah can impersonate Jessie, claim the fortune, and split it with him. The role of a lifetime, he says. A one-way ticket to Sing Sing, she hears. But when she’s let go from her job, Oliver’s offer looks a lot more appealing. Leah agrees to the con, but secretly promises herself to try and find out what happened to the real Jessie. There’s only one problem: Leah’s act won’t fool the one person who knows the truth about Jessie’s disappearance.

This book was alike to the story of Anastasia. I don’t really know that REAL story, but I know the Disney version. Princess missing, and then people trying to get an award or something for returning her to her family. Yeah, this story was quite close to that one. Except a slight bit more chilling (thank you mystery-thriller authors, you make my life).

Leah (who’s name I honestly forgot about since she’s called Jessie through 90% of the novel), is a vaudeville actress/singer who is approached one night after a performance by “dear Uncle Oliver”. She’s offered the role of the lifetime: impersonate the long lost Carr heiress and split the inheritance with him. However, as their ploy unfolds, Leah begins to dig into the past in hopes of figuring out what happened to the real Jessie Carr.

This book really surprised me. I was definitely not expecting what I got, and I’m so happy that I was wrong. Leah is a likable character from the start. She’s an orphan who’s determined to make her way through the world on her own. She’s very independent and charitable towards her fellow performers, as they don’t get paid much, unfortunately. She knows how to steal and find food if the need presents itself and she knows how to survive on her own. However, when she loses her job, she takes on the role of Jessie Carr. As time goes on, she becomes close with her false family and begins to feel guilty for her crime. Leah’s character is absolutely believable and her acting impeccable.

I love the way the mystery was weaved into the story. Through small things here and there, the story allowed both the readers and the characters to piece together the clues and figure out who done it. It was amazingly constructed and I really enjoyed how put together and easy flowing the story was, especially since  Leah had to uncover a lot. It never, however, got boring, and the end was insane, heart-shattering, and PER-FECT.

A copy of this book was provided by St. Martin’s Press, Minotaur Books, via NetGalley in exchange for an honest review.