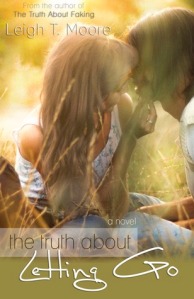 Ashley Lockett has always followed the rules. She’s always done the right thing and played it safe until her ideal life is shattered when her dad dies suddenly.

Fueled by anger and grief, she vows to do everything opposite of how she lived before. Then she meets Jordan. He has big dreams, he’s had a crush on Ashley for years, and he’s a great kisser. But he’s also safe.

Enter Colt. He is not safe, and he’s more than willing to help Ashley fulfill her vow.

This book was enjoyable. It wasn’t blow your mind amazing, but the plot and ideas within the book are fantastic and the pace is perfect for this novel. However, as much as I loved the overall concept of the book, the characters simply did not work for me.

Ashley is selfish, immature, and, pardon my language, a bitch to basically everyone she knows. She doesn’t respect Jordan’s boundaries, doesn’t give a flying frick about Mandy’s feelings when it comes to Colt, is really mean to Charlotte, disrespects her mother, and acts like she’s the only person on the planet who cares about her father’s death. I can understand the fact that she feels like acting out after her loss. I understand that her faith in God has been shaken. But I can’t understand why, if she can’t help pushing people away, she has to push people’s boundaries and cross lines without caring who she hurts. Just because you don’t think God’s watching your every move doesn’t give you the right to be a shitty human being, sorry.

Admittedly, she does slowly grow throughout the novel and by the end, I liked her, for the most part. However, the finale of her character’s growth is cut off by the end of the book, and in the end, we only see half of the final product of what the experiences in the book taught her character.

Along with my mild distaste for Ashley, I did not like Colt’s character. He was… creepy, in my opinion. Anyone remember when Paul Wesley guest starred in the show 8 Simple Rules? He played a bad boy kind of character, and every time he’d come around, weird music would play and Bridget would be totally captivated by him. That was kind of Colt and Ashley’s relationship. He’d just be standing around, and they would just stare at each other until he would yank her to the side to either make-out or do something “bad” or “sexy”. It would all be so abrupt it was like literary whiplash and most of Colt’s parts bothered me.

However, while these two characters were testing my patience, Jordan won my heart. He was that nice nerdy guy who always stuck around. He was innocent and pure, and I loved that about him. Throughout the book, he was the sane, steady character who kind of guided Ashley through it all and kept the overall story grounded so nothing too insane happened (for the most part).

Charlotte was another character who I really liked, but unfortunately, we didn’t see much of her. And most of the time Ashley was being too high-and-mighty for Charlotte’s character to really grow in this book. Who knows, maybe we’ll see her soon in another companion? But I’d love to see more of her and get to know her character better.

A copy of this book was provided by All Night Reads, through NetGalley in exchange for an honest review.