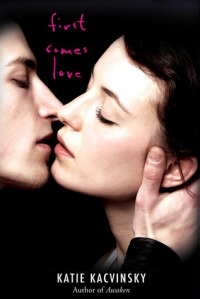 Like his name, Gray is dark and stormy. Dylan, a girl always searching for what’s next, seemingly unable to settle down, is the exact opposite: full of light and life. On the outside, they seem like an unlikely couple. But looks can be deceiving and besides, opposites attract.

What starts as friendship, turns into admiration, respect and caring, until finally these two lone souls find they are truly in love with each other.

But staying in love is not as easy as falling in love. If Dylan and Gray want their love to last, they’re going to have to work at it. And learn that sometimes love means having to say you’re sorry.

This book was… refreshing. Like you don’t even know. Before I started reading this, I had been burning through a bunch of books that were all based on fairytales and it was absolutely mind numbing.

There were two things to this book I loved:

1. There was nothing supernatural about it. No demons popping out of the sewers, no vampires or werewolves slinking around after dark, and none of this book came from a freaking fairytale story book.

2. This book was a light (?) read. The emotions, they were there, and absolutely intense. There was a real world problem (coping with the death of a loved one), however… the way that comes out in this novel isn’t depressing. It doesn’t bring you down, but instead it gives you hope… maybe I’m describing this wrong… All I know, is that this book didn’t bring me down, it made me smile, it let me look at life at a different perspective, and I loved it.

I think the best part of this book was the fact that it was so real. There wasn’t any instant-love, or even instant friendship, but instead readers get to see a relationship unfold from the beginning. The scenery, the actions, the story, it’s so realistic and yet it still sweeps you away from your world into the book.

The book has Gray and Dylan alternating chapters, narrating their own feelings as their relationship grows, their thoughts change, and their adventures begin.

Dylan’s a really dynamic character. She’s one of those people who can jump into your life, blow it to pieces, and then hop back out in the blink of an eye. She’s like the Luna Lovegood of the book, and, as with Luna, her character works so well. I loved that fact that Dylan managed to see the world from a different point of view, acting as probably the most optimistic character I’ve ever read about. Dylan not only changed the way Gray looked at the world, but really opened my own eyes to a more positive way of thinking, and I think that really made the book all the much better.

Dylan’s quirkiness was balanced by Gray’s sarcasm, making the book equally as hard hitting as it was hilarious. This is the perfect book for someone who’s in between novels and wants something they can laugh with, but also learn something from.

I don’t even know if this review even does either character justice (definitely doesn’t do much for Gray…), but honestly, you have to pick up this book and read it, it’s too good not to.

The one thing that killed me was the end of the book, mainly because it ended… but then I learned that Kacvinsky released a sequel (Oct 31,2012), WHICH I CAN’T WAIT TO READ… but I must ’cause University is a lot more work than I had expected…

Quotes:
We stand there for a minute, facing each other across the car, waiting for the air inside to cool down to a degree below Hell.
-Narrator [Gray]

And I don’t buy flowers. That’s one gift I refuse to spend money on. I’m not going to hand over hard-earned cash for something that dies in a week.
-Narrator [Gray]

So many people worry their lives away. They take themselves so seriously. They try to fight time and aging and gravity and death. They spend so much time stressing and planning and overplanning that they miss out on living.
-Narrator [Dylan]

It’s hard to accept that you’ve missed out on a person, that all you’ll ever know of them are pieced-together stories. It’s not like missing out on a party or a concert- those are temporary experiences, and you’ll have other opportunities. But this is permanent. It’s like being robbed of something valuable you never had the privilege to own.
-Narrator [Dylan]