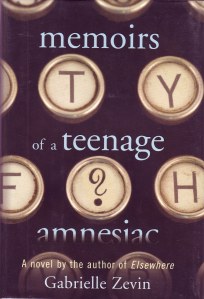 Naomi has a boyfriend, a best friend, and divorced parents. She’s popular and she is in love with the school yearbook. But she can’t remember any of this. After a violent fall down the school steps, Naomi finds herself unable to remember anything since 2001. Thrust into a life she can’t remember, Naomi begins everything from the beginning: getting to know her best friend, getting herself into some boy trouble, and finding that her life isn’t as perfect as it was in 2001. Naomi rediscovers herself and the people around her, and finds that her amnesia has given her a second chance at her own life.

To be honest, I expected so much from this book. It’s not that I was disappointed, it was a good book, but halfway through the book, she stops all contact with the guys in her life, vaguely, and I don’t know… there was a lot of wallowing in her own indecision. It was realistic though, I’ll give Zevin that. Not the fact that she was willing to take a trip to another state just for a guy, but the idea of amnesia and her own rediscovery. This was my first book by Zevin, and I will try other novels by her (I heard Elsewhere is good), but I expected more of a heart throbbing love story, haha. However, as humans, we do tend to wallow in indecision and confusion. We often cut ourselves off from the rest of our lives when we’re lost. So it is realistic. As a love story, I say eh: there was love but I pined for more. Overall, a fairly good book ~

Quotes:
“Someday, we’ll run into each other again, I know it. Maybe I’ll be older and smarter and just plain better. If that happens, that’s when I’ll deserve you. But now, at this moment, you can’t hook your boat to mine, because I’m liable to sink us both.”
-I love this speech but I don’t want to say who says it.

“What were you like,” I asked her. “we’re you happy? Or were you smiling because they told you to?”
-Naomi to herself