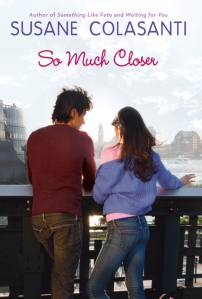 Seventeen-year-old Brooke has a crush on Scott so big that when he heads for New York City, she moves into her estranged father’s Greenwich Village apartment, but soon she begins to focus on knowing herself and finding her future path.

When I saw that Colasanti had another book, my gosh, I was excited. I loved her other books, so when I finally got my hands on ‘So Much Closer’, I was ecstatic.

The book is about Brooke. Her parents were divorced and she was living with her mother in New Jersey while her dad was living in New York. Scott, a boy from school, is her world. She is crushing hard, and would do anything for him, even though she knew that he probably didn’t even know her name. However, right before she confesses to Scott, he tells her that he’s moving to New York. Shocked and appalled, she decides to move to New York and live her father, who was the reason for her parents’ divorce. Forced to overcome this barrier between her and her father, she begins to discover who she is and who her real friends are. As she journeys through New York, she meets Sadie and John, who become a large part of her life by accident.

I’m sorry. As much as I anticipated this book, I didn’t like it. Yes, it was very well written, as are all of Colasanti’s books. However, I found it quite silly to pick up your life and move to a new city FOR A GUY. Also, she’s supposedly a reluctant genius, however, that seemed to only apply to school work and not common sense… It was a good book, don’t get me wrong. I have to say, though, the second half was definitely better than the first.

I’m disappointed, and yet I’m not. I mean, her writing has gotten better, however, the story line was lacking. Overall, it wasn’t her best book, but it could’ve been worse.

Quotes:
“You can never completely know anyone, no matter how well you think you do. There will always be some truth about them you don’t ever get to know.”
-Narrator (Brooke)

“Physical attraction that strong is addictive. And knowing that kind of magic isn’t just a fantasy makes me want to find it again. But what about being with someone who makes me a better person? What about sharing my life with someone who adores me as much as I adore him, whom I can always count on, who helps me find my way when I’m lost?”
-Narrator (Brooke)